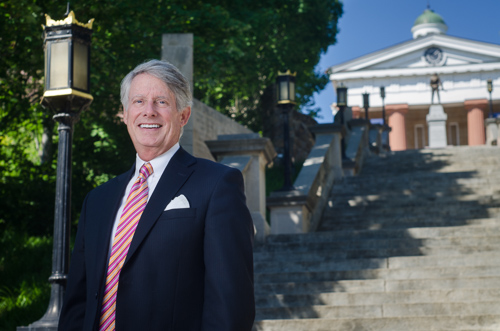 Ed Dawson has been a trial lawyer since 1982. He began his career in the courts prosecuting drug dealers in the City of Richmond, and moved back to Lynchburg in 1986. In 1988, along with David Petty and Dick Livingston, he became a founding member of our firm and has been representing our clients in the court system ever since. Mr. Dawson has extensive experience in civil and criminal trials, and represents both plaintiffs and defendants in all Virginia State and Federal Courts. From traffic ticket cases to claims involving millions of dollars for nationally known companies, he is a tireless advocate for our clients, whether in the courtroom or by exploring alternative resolutions through mediation and arbitration.

Ed has served as a Special Assistant Bar Counsel for the Virginia State Bar and served on the Ninth District Disciplinary Committee for the Bar (Chair 1995-1996); he is a member of the Lynchburg Bar Association (President of the YLC 1990-1991) and the Virginia Association of Defense Attorneys (Board of Directors 1992-1995).

He is active in the community outside of the practice of law, serving on the Boards of corporations and non-profit organizations in Central Virginia. Somehow he finds time to enjoy a myriad of hobbies such as playing golf, tennis, water and snow skiing, and piloting RC aircraft.

University of Richmond, B.A. in Psychology and Sociology (1978)

United States Bankruptcy Court for the Western District of Virginia