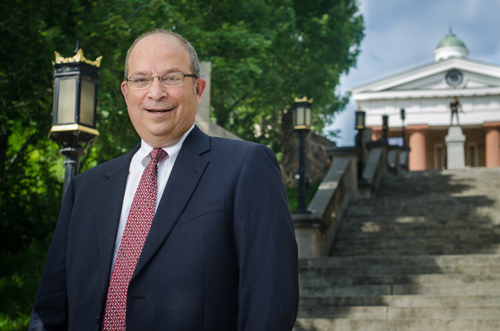 Paul Feinman is a native and resident of Lynchburg and has practiced in the areas of creditors’ rights and real estate law since 1989. After finishing law school in 1986, Paul practiced for two years in the litigation department of a large regional law firm based in Charleston, West Virginia. Paul then returned to Lynchburg in 1988 where he worked as the Law Clerk for the Honorable William E. Anderson, Judge of the U.S. Bankruptcy Court for the Western District of Virginia. In 1989, after his clerkship, Paul re-entered private practice with a focus on the creditor side of bankruptcy cases. He also developed a substantial real estate and estate planning practice, including federal estate tax planning.

Paul’s practice includes all facets of creditor representation, including foreclosing on collateral or crafting work-outs with borrowers prior to bankruptcy, and generally protecting his clients’ interests when a borrower, customer, tenant, or other related party has filed a bankruptcy proceeding. Paul’s bankruptcy experience has included involvement in individual Chapter 7 and 13 cases as well as corporate Chapter 7 & 11 cases filed all over the country. In the area of commercial real estate, Paul handles sales, acquisitions, loans, and leases. His experience ranges from “mom and pop” building ownership to large, complicated transactions with sophisticated sellers, purchasers, and lenders.

Paul is a former youth soccer coach and youth soccer referee. He enjoys spending time with his wife and two children, as well as getting onto the golf course or the James River.

United States Bankruptcy Court for the Eastern District of Virginia

United States Bankruptcy Court for the Western District of Virginia